MG-SOFT YANG Explorer Professional Edition is special application that lets you load YANG and YIN modules and explore their structure and properties in the intuitive graphical user interface.

The software can load any set of standard or vendor-specific YANG 1.1 (RFC 7950) and YANG 1 (RFC 6020) modules (and equivalent YIN modules) and display their contents in a visual manner, where module elements are represented as nodes of different types in a hierarchical tree structure. By expanding the YANG tree and selecting a node in the YANG Tree panel on the left side, its properties and description are displayed in the Node Properties tab in the right side of the main window. In addition, the YANG Source File view and the Textual Tree Diagram view are also available and let you quickly view the section of the YANG code that defines the selected node/subtree, or the textual tree representation (as defined in RFC 8340 and commonly used in IETF NETMOD publications) of the selected data tree branch, respectively.

YANG Explorer implements a wealth of features that let you effectively explore references between YANG statements within one or more YANG/YIN modules. While exploring YANG modules, it is vital to be able to quickly navigate between a reference of a definition and the definition itself, for example, to be able to go from an "if-feature" statement to the definition of a matching "feature" statement. YANG Explorer now offers such navigation whenever a reference exists. The software also provides a reverse functionality that lets you quickly find all usages of a definition in the loaded YANG/YIN modules, for example, to find all "if-features" that reference a specific "feature" definition. This is supported for "typedef", "grouping", "identity", "feature" and "extension" statements. 'Leafrefs' (YANG statements with a "leafref" type) are also an important concept in YANG, and the software now offers a quick way to find all 'leafrefs' and their target schema nodes in a module. Furthermore, you can also select any "leaf" or "leaf-list" node in the YANG tree and search for 'leafrefs' that reference it by using the "Find Referencing Leafrefs" functionality. 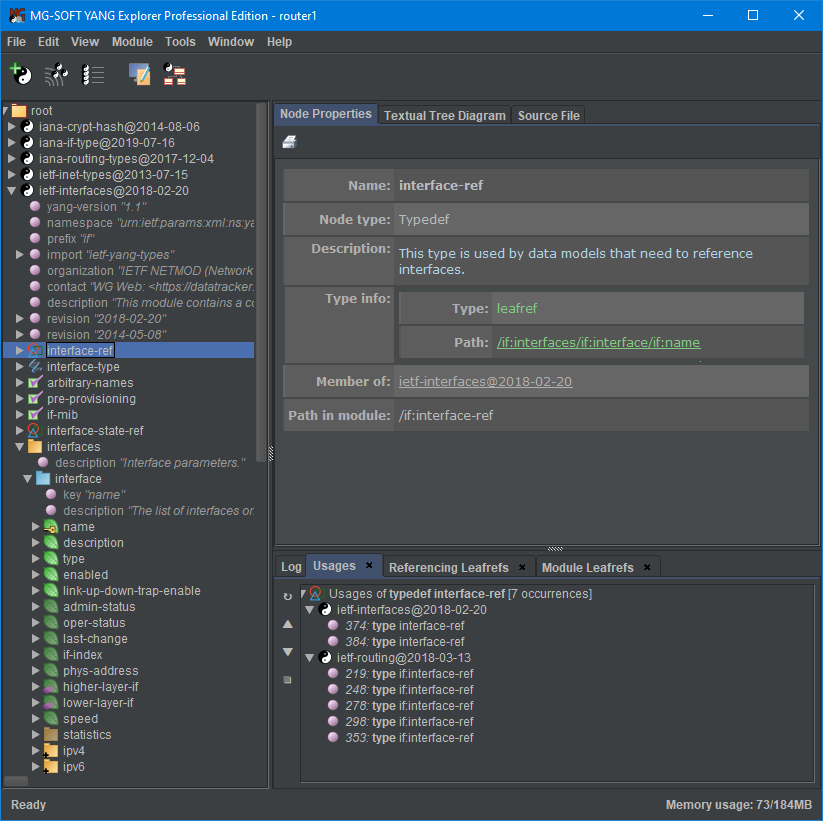 MG-SOFT YANG Explorer can visualize the selected YANG modules in form of a UML (Unified Modeling Language) class diagram. UML class diagram displays different types of YANG nodes as classes, with their attributes, methods and relationships between the classes (e.g., dependency, composition, inheritance, etc.). You can explore the UML objects and their relationships either within the scope of a single or several associated YANG modules. Furthermore, YANG Explorer lets you focus on the desired elements of YANG modules by specifying excludes (excluding specific, user-selected classes) and by setting various display options (to toggle displaying certain types of classes globally, etc.). You can zoom in and out of the UML class diagram, pan the diagram, reposition classes and connections in the diagram, print the diagram on a printer, and save it as an image file for external use.

The software lets you explore the dependencies between YANG modules in form of a dependency graph and dependency tree, where it is clearly visible which modules and submodules are imported and included by selected module(s). YANG Explorer also allows you to compare YANG modules side-by-side in graphical form and explore the differences between them. Furthermore, it lets you select YANG modules and export them to JavaScript-driven HTML format, featuring an expandable and clickable YANG tree view, as well as the complete definition of all modules, with hyperlinks between the referenced nodes.

YANG Explorer also incorporates the RFC 6110-based NETCONF Content Editor and Validator tool that has been extended by MG-SOFT to support also YANG 1.1 and RESTCONF protocol data structures and allows you to easily compose any type of NETCONF XML or RESTCONF XML or JSON document and validate it using the DSDL schemas, which are automatically generated from selected YANG modules. You can edit a NETCONF or RESTCONF document or message either by using the full-fledged XML/JSON editor with syntax coloring and code-completion feature (screen shot) or by using the Visual editor. The latter lets you simply right-click a node in the tree view and add/remove elements and set their values by choosing commands from the context menu (screen shot). Both editors guide you while composing the NETCONF or RESTCONF content by allowing you to add only those constructs that are valid at the given location in the document. Furthermore, easy-to-understand validation messages let you quickly fix all syntax and semantic inconsistencies in the document you are editing.

MG-SOFT YANG Explorer is a Java(TM) application that can be installed and used on Windows, Linux and macOS operating systems with Java Runtime Environment version 8.0 (a.k.a. JRE 1.8) or later installed.